Teenage is a documentary film based on the book ‘Teenage: The creation of youth culture 1875-1945‘ by Jon Savage. 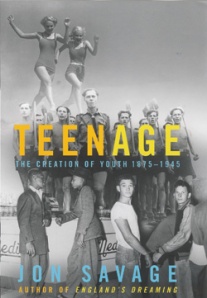 It is directed by Matt Wolf and is narrated by actors including Ben Wishaw and Jena Malone.  The docu-film is told through narration and old footage both in black & white and colour. It portrays the youth generation perfectly from 1904 to 1945.

I never realised until now, that the freedom i took for granted as a teenager was thanks to the sacrifices the generations before me made in the past century. There was once a time when Teenagers didn’t exist, we were once children forced to grow up and work from as young as 12. Children would work 77 hours a week, it was slave labour. Soon adults realised it was wrong and child labour became against the law. When they were working at the factory they felt like prisoners but once it was over and they were playing on the streets, it was pure freedom. What haunts me though is that history repeats itself and in recent times there have been reports of child labour. This film perfectly captures the issues then that still ring true to this very day.

The youth then learned about Patriotism, courage and self-reliance from being a Boy Scout. The young generation of boys yearned for adventure and camping and here it was. Nowadays we have summer camps, a scheme to let the youth of today have something to do during their summer breaks from education.

When the war came, the American culture started to spread. It bought new music, dances and films to various countries. Swing became a big thing among the young generation. They could let lose, have fun and dance away their problems. They wanted to start over and forget about the horrors of the war. They saw many of their young friends die and hated the adults for sending them in to die.  How can they be expected to trust adults?  This is when the old world died and a new model for youth was born that still exists today-‘The Teenager.’

After the war, they took away their weapons and gave them Coca Cola instead. It’s scary to think that Coca Cola is a symbol of youth. Can teenagers really be defined by a fizzy drink? In a way we are heavily influenced by the American culture. After all it was America that gave us the ‘Teenager.’ It was the New York Times in 1945 that created the Teen-Age Bill of Rights;

* It gave them the right to have rules explained and not imposed.

* The right to question ideas

* The right to be at the romantic age

* The right to a fair chance and opportunity.

The teenagers of today are important to business, as they were then, as they are a profitable target market. The youth of today want the latest technology and gadgets. They help influence the fashion world as well. Teenagers can earn their own money now and that extra money to burn attracts the attention of companies such as Apple. How many people have you walked past today listening to an IPod or twitting on their IPhone?

This docu-film is really about teenagers, then and now, and how they will fight for their rights and for the world they live in.

Teenage will be shown on Tuesday 4th February 2014, as part of the  Glasgow Youth Film Festival

Such a great night seeing @babymetal_official hopefully I will be able to see them again. #babymetal #jrock #metal #gig
Had a great day exploring #Cardiffcastle wish we had gone earlier but totally worth it
I finally found my Snorlax onsie and I have to wonder as a grown man do I need this? I think yes ! #pokemonswordandshield #pokemongold #pokemon #pokemonblue #pokemonred #pokemonart #pokemoncosplay #pokemoncommunity #snorlax #japan #nerd #geek #cosplay #pokemonredandblue #pikachu #pjs