Sanrio, the global lifestyle brand recognized worldwide for its universally beloved pop icon Hello Kitty, returns to Comic-Con International: San Diego with a focus on introducing new products and surprises. Visitors to the Sanrio booth (Booth #4737) will have access to convention exclusive merchandise, including: 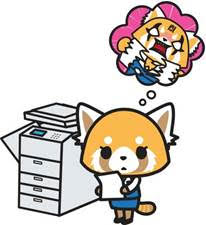 In addition, limited edition Comic-Con products will be featured in the following partner booths:

The fun doesn’t exist just solely inside the convention center! Be on the lookout for the Aggretsuko street team, roaming the convention grounds and downtown San Diego, passing out collectible Aggrestuko flyers and lanyards – the perfect accessories to your AggretuskoSnapchat lens selfies!

We had another movie night last night and it's times like that, that I do not regret building a minute home cinema. Last night's choice was Godzilla Vs Kong which really surprised me some great action, fantastic soundtrack thanks to @tomholkenborg , with great cinematography it was just an all round fun film to watch and perfect for a Saturday night.
Our weekly Curry night and I'm having trouble picking. Which one should we go for?
It's hard to believe that it has been five years since Persona 5 took the world by storm. I guess I didn't see it coming ...
My Tweets