When I first came across the TV series Manhattan I was a little surprised at the subject matter. I am not one to really read up on what I watch; I just pick a title and go with it. This technique has been rewarding with some series such as Men at Work and Avatar, but it’s also let me down with shows like Taxi Brooklyn (The show has a lot of potential but the camera work really put me off). With a title like Manhattan I was not sure what to expect, but what I got was not a tale of the place but instead a fictional account of the project.

For those of you who are not familiar with it – The Manhattan Project was a joint effort by the United States, Canada and the United Kingdom during WW2 to develop the atomic bomb; we all know how that turned out.

Once I heard the words New Mexico and the cast members grumbling about how hard it was to find their location my brain clicked and I knew what the series was about. This will be a fictionalized version of the events that took place, since so much was classified it’s really hard to know everything. Also I’m pretty sure the project had many mundane events, even for a top secret classified town. Then again the mundane is what probably draws people in, here you have a town with an IQ greater than any that has ever existed and still they have to go through the everyday normal activities that the rest of the world does.

That’s only half the appeal, the great appeal is the Atomic Weapon and its physiological and possible physical effects that it has on the cast of characters. The men and women behind these weapons not only have to keep their work secret from those closest to them but several show signs of fear at what these weapons are capable of. It’s a side of the story no one ever really thinks of. I’m sure many people where focussed on the work and the need to create a weapon to end the war, but you have to wonder how many stopped and thought about the consequences.

The scientists keeping secrets are not the only one’s affected; their families must suffer the lack of privacy with mail being checked and a near complete disregard for personal freedoms. These every day average folk are making a massive sacrifice and they don’t even know what it’s for!

I meant a possible look at physical affects, this has only been briefly hinted to, in a supposed new strain of plant found, but that could be little more than a red hearing. As for the cast, it’s a pretty good ensemble cast with performances by John Benjamin Hickey and Olivia Williams play a loving couple and work well with each other. I would have liked to see more of Daniel London who plays Dr Oppenheimer, a tricky role to play; hopefully he will get more screen time as the series progresses. 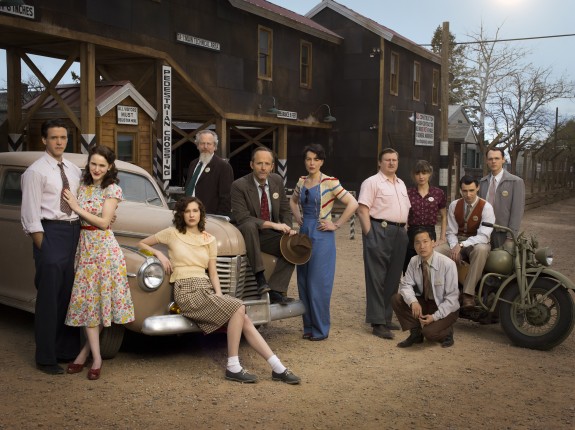 On an interesting note the timing of the series does seem to coincide with a renewed interest in what nuclear weapons first world countries have at their disposal, not that’s probably a coincidence.