San Diego Comic Con is the place to be to pick up free swag. The film production companies and TV networks spend a lot on publicity at this event to promote their films and TV series. A great way to garner social media mayhem and word of mouth is by getting the fandom hyped about the free swag they hand out on the exhibition floor and offsite. The only problem is trying to find the information about where and when you need to be to get your hands on the exclusive and limited free stuff. Yes a lot of the stuff could be leaflets and other paper related advertising but every now and again something comes along that makes you ask “Where did you get that?” One of the best swag items that the Fox booth has handed out in the past years at Comic Con is the Bones light up glove. I just happened to be at the booth when they handed them out.

To help those attending Comic Con this year (myself included) I’m going compile a list of swag available with as much information as I can find. If you know about any Swag that will be handed out this year, let me know and I’ll add it to the list.

Missed out on getting the Swag at San Diego International Comic Con 2014? A competition is happening soon to offer you the chance to win some of the Swag we obtained at SDCC 2014.

Before you hit the exhibition floor, your first piece of swag will be the Warner Bros bags you get when you pick up your Comic Con badge.

From Preview night at SDCC Warner Bros where handing out the Mike Tyson Mysteries bag at their booth.

TV Series: Once Upon a Time

Swag: Comic-Con goers will experience the worlds of “Once Upon A Time,” “The Quest,” “Galavant,” “Resurrection” and “Toy Story That Time Forgot” in the magical ABC Castle.

Fans will get to visit Mr. Gold’s Pawn Shop and pick up an exclusive custom pin.

Those who collect all five pins will win passes to the “Once Upon A Time,” “Resurrection” or “Toy Story That Time Forgot” autograph session (subject to availability).

There will also be free signings, which are all held at the Cartoon Network Booth #3735. Tickets are required and can be obtained at the booth.

Free limited edition posters will most likely be supplied for the signings.

Swag: Pick up posters of original Marvel, Sin City and Jay & Silent Bob Minimates artwork that will be handed out throughout the weekend.

Limited-edition giveaways will also be distributed from the booth (while supplies last):

– WAYWARD PINES Air Fresheners and Autographed Copies of “Pines,” by Blake Crouch, the book on which Wayward Pines is based.

– Collect all THREE of this years FOX ANIMATION Bags, featuring: “Lisa” from THE SIMPSONS, “Stewie” from FAMILY GUY and “Tina” from BOB’S BURGERS.

Present “Family Guy the Quest for Stuff” app on your mobile device and receive a free Family Guy mini figure from Kidrobot and FOX! While supplies last.

The one Exclusive everyone will want their hands on is this Hannibal figure custom designed and signed by Bryan Fuller. For a chance to win make sure you head to the Funko Booth (from Wed 23 July) and fill out an entry card to enter to win. Entry cards will be drawn on Sunday. 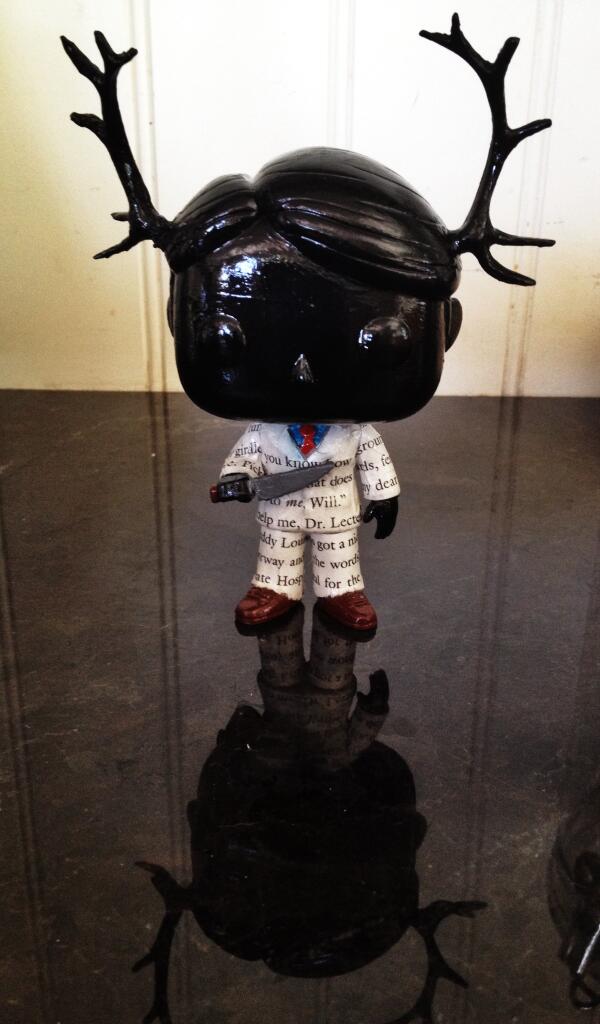 Swag: Check the picture below.

Visitors to the PSA booth at the 2014 San Diego Comic-Con can get free samples of PSA-certified X-Men and Game of Thrones cards while supplies last.

Visitors to the PSA booth can enter for a chance to win the original acrylic-on-canvas Godzilla artwork created for the magazine’s August 2014 cover by renowned artist Arthur K. Miller. Valued at more than $3,000, the custom-framed artwork will be given away to a lucky visitor in a random drawing among those who register at the PSA booth during the convention. No purchase or payment is necessary to enter the sweepstakes. The Official Rules can be found at PSAcard.com/comiccon.

Swag: Will be offering a FREE 2014 Button Pack and other SCREAM FACTORY goodies such as collectible keychains, screen wipes, Transformers Rescue Bots Poster and this Fire Elemental figurine which you can get for free from their booth on Sunday 27 July. You can also get a free poster tube(while stocks last) when you get the My Little Pony: Friendship is Magic poster.

Wristbands will be available from Thursday for the Jason David Frank (Green Power Ranger) signing on Friday at 3PM.

Swag:  Limited Edition Bestiary that serves as a full guide to the creatures of Beacon Hills.  The Bestiary will be distributed for free throughout the weekend.

Swag: TNT is also set to launch a social media initiative supporting Legends in conjunction with its Comic-Con presence. The network is encouraging fans of actor Sean Bean to use the hashtag #DontKillSeanBean in social media postings about the show. The hashtag plays on the fact that Bean has died in more than 20 acting roles, including the two characters for which he is widely known: Boromir in The Lord of the Rings trilogy and Eddard “Ned” Stark in the series Game of Thrones.

The hashtag will have its own tumblr page and will be featured on Legends premium items being handed out to Comic-Con attendees.

WARNER BROS. TELEVISION AND TV GUIDE MAGAZINE JOIN FORCES ONCE AGAIN ON A SPECIAL COMIC-CON® EDITION OF THE MAGAZINE SHOWCASING THE STUDIO’S PROGRAMMING

Swag: Pick up a FREE Comic Book starring the voice of SpongeBob Sqaurepants

Swag at the Panels

For the critically beloved drama “Hannibal,” which Vulture.com says is “unlike anything else on TV or anything that ever has been on TV,” the panel will include cast members Caroline Dhavernas, Aaron Abrams and Scott Thompson, as well as executive producers Bryan Fuller, Martha De Laurentiis, Steve Lightfoot and David Slade. The panel, organized by Gaumont International Television and moderated by U.K. talk show host Jonathan Ross.

Join creator John Logan and the cast for cocktails and appetizers.

Four lucky members of the panel audience will have the opportunity to win tickets to this party.

Creator and showrunner John Logan is joined by spellbinding stars Josh Hartnett(Ethan Chandler), Reeve Carney (Dorian Gray), and Harry Treadaway (Victor Frankenstein), as the monstrous new series possesses Ballroom 20. Enter the demimonde to find out what moments haunt the writer and cast from the first season and view a sneak peek to see what the cards reveal about the season ahead. The panel will be moderated by Emmy Award-nominated actress and host Aisha Tyler (Archer, The Talk), followed by a Q&A session with the “Dreadfuls.” Penny Dreadful returns to Showtime in 2015.

Swag outside the Convention Center

Swag: CBS is partnering with Nerdist to present a SCORPION-themed tent at Petco Park, featuring a candy kiosk and SCORPION giveaways branded with exclusive superhero-inspired art of the series’ characters.

Location: Between the SD Convention Center and the Hilton Bayfront Hotel

Swag: FOX will create Gotham City for fans to channel their inner superhero by ziplining (130 feet long and 30 feet high) through the GOTHAM city landscape!

Following the adrenalized experience, participants will receive a shareable photo of their heroic zip line experience and will be awarded with exclusive GOTHAM prizes.

Swag: DON’T LOSE YOUR HEAD! FOX is bringing SLEEPY HOLLOW back to San Diego with an Oculus Rift fan experience. This virtual reality installation transports the user deep into the heart of Sleepy Hollow where the fans receive an ominous warning from Ichabod Crane and then a terrifying encounter with the Headless Horseman.

Participants will receive a personalized, souvenir image to share across their social media pages.

Location: 628 L Street (Across from the Omni Hotel)

This will feature authentic show costumes and props and a chance for fans to climb the wall.

Exclusive giveaways will also be on hand for the first 2,000 attendees who enter the space each day.

Swag: Fans will be able to get on “The Blacklist” via a custom photo opportunity and also receive “Blacklist” souvenirs.

Location:  At Gaslamp Square (Between the Hard Rock Hotel and the Convention Center)

This event will be a- 3-D experience that will immerse fans in the world of “Constantine.”

Swag: Limited edition souvenirs will also be given away including this Bag.