3)EQ systems- very extensive, however you would usually stick to one general setting

4) Power: with 232 watts of power, this will shake walls and cause earthquakes, sound quality does not fall at full volume, each tweeter, woofer has it’s own driver

So you want to know whether these speakers are as good as they sound, probably because every other review website has given it their most positive opinion. Well I’m afraid I have to say, they are almost flawless.

I bought the Corsair SP2500 for a couple of reasons (why i needed them), I needed speakers that were able to produce sound at high volumes (for a bit of pay back against my dorm neighbor who think’s his 10 watt Logitech travel speakers is the bee’s knees), and to produce it at good quality, don’t want distortion everywhere. I had at first been using my 20 watt Roland 20XL guitar amp for speakers, which was fine at low volume, but actually stuttered when it needed to play some bass ( it’s a guitar amp, bass is not it’s purpose). The second reason was that I needed a sound system for gaming and watching films, I was tired of having to wear a headphone for decent sound quality. Finally, I needed speakers so good, that I could tell myself,”it wont fail me”.

Well, here it is! 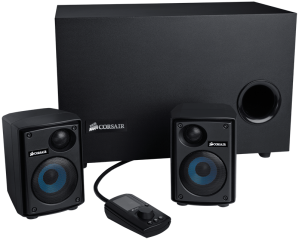 Doesn’t look very intimidating doesn’t it? Well, the image doesn’t do the speakers justice, the sub woofer is the size of an Oven Microwave! I bought mine from Scan Uk for about 200 pounds. It came in one hell of a box, it was very well packed, and can be easily repacked. But enough of the boring parts.

After a week of using it, i noticed that the audio jack cable was too short, it was of sufficient length if the sub woofer was under your desk, but the jack wouldn’t go any further than that. However, that problem was outweighed by power, quality and tech on this speaker. I played a few tracks by Overwerk, specifically Daybreak and 12:30. The speakers were perfect, no stuttering at the bass, it in fact made the song sound better! Next, impress friends….for this I played 528491 from Inception, its safe to say they were impressed. The speakers pumped so much power, that the walls were shaking and we could feel the ground shake.

These speakers are of great quality and it wont break down on you after 5 minutes of play time. The build quality is brilliant, however if you use the sub as a under the desk leg rest, dont be surprised if the decorative front sheet starts to peel off ( although almost unnoticeable).

For a company new to the audio world, Corsair has hit the ground running, the speakers are on par with other high quality brands such as Bose, and surely the price tag is up there too. However, if you are an audiophile, or a gamer who wants to be sure that your kit is the best, the Corsair SP2500 speakers are a must buy. These speakers will do everything from making your home sound like a cinema, to turning it into a club ( no joke, these speakers debut was at a Club, not a gamer’s con), all the way to scaring the poop out of unkind neighbors.