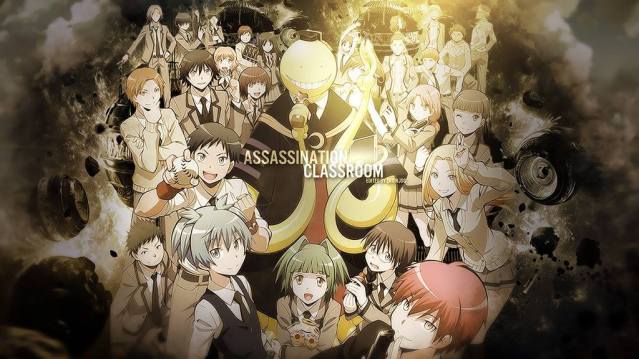 What if I told you that there was a TV show about a yellow tentacled monster with a smiley face who moves at speeds of Mach 20 and it cannot be harmed by conventional weapons, heals super fast and has the power to destroy 70% of the moon without breaking a sweat. Oh and did I mention that said character wants to destroy the world, but before he does he chooses to become a teacher to a class of failing students. No I’m probably not on drugs but this is an actual anime series and yes it’s an anime based on the extremely popular manga series Assassination Classroom (Ansatsu Kyōshitsu).

Korosensei (unkillable teacher) has to be one of the most intense and weirdest lead characters I have ever seen in an anime. Now you’re probably wondering how is he a teacher, it’s a simple and strange fact that he made a deal with the world’s governments that he will teach this class and the class will be allowed to try and kill him and in return he will not kill them and give them a first class education. Though he is not the only character worth seeing in this series full of rejects and loners, you have a class full of nerds, bullies, jocks and a possible sociopath. Further adding to this mix is the classes other teachers. There is the cool ex-military gym instructor and the never tastefully dressed assassin and english teacher.

So in theory an entire classroom of people should make for an easy assassination. Nope it doesn’t as he moves so fast that he can not be hit by regular weapons and his reaction time is insanely quick, hitting him is impossible, but that’s the fun of this series. An entire classroom of potential murderers vs their target who moves so fast that he can groom them (by this I mean paint their nails, fix their eye brows or put adorable aprons on them), or grade their journals without them even knowing it.It us just briilant.

Beyond this there is another side to the series, Koronsesei is actually a good teacher and that’s the funny side to it. While all these kids are trying to blatantly murder their teacher, in many circumstances under his own guidance, he proceeds to teach them valuable life lessons, nurture their gifts and help them reach their full potential. The premise is utterly ridiculous and out of this world but in the end the series will make you smile.It’s very heartwarming and charming but there are many moments that will make you laugh out loud. So for this years anime series it’s my top pick as I have not seen one like it before, plus it keeps inner monologue and fan service to a minimum, which in itself is refreshing.

If you like the look of this but don’t have time for a full series, or maybe you loved this series and want more, well then you could always check out the live action film instead, have not seen it yet but it looks to be interesting.

In honour of the upcoming #nationalkatsucurryday I am taking part in the #katsucurrygiveaway and well posting my own Katsu, this one is homemade with boiled potatoes and carrots, some onions and peppers lightly fried in butter all dumped in with extra spicey curry cubes. The perfect meal on a cold(ish) night.
We had another movie night last night and it's times like that, that I do not regret building a minute home cinema. Last night's choice was Godzilla Vs Kong which really surprised me some great action, fantastic soundtrack thanks to @tomholkenborg , with great cinematography it was just an all round fun film to watch and perfect for a Saturday night.
Our weekly Curry night and I'm having trouble picking. Which one should we go for?
My Tweets