Adam Richman, famous for Man Vs Food, came to Dublin to take part in the Food Summit. The Food Summit was part of the Web Summit 2014, it showcased the local culinary talents of Dublin (thanks to Good Food Ireland) and the future of technology in the food industry. Adam took part in a press conference to talk about his latest TV show and his upcoming new book.

I feel like I’m in Real Madrid’s new signing up here, I’m happy to help the ball club, help it to get some free points. With Food Fighters, we had a successful run with 8 episodes in the United States, basically a home cook brings five of their best recipes to go up against five professional chefs. The idea is that the home cook doesn’t know what chef they are going up against next or their expertise. There’s a little bit of strategy in there, the home cooks are sort of playing to the weak spots of these professional chefs. It’s actually quite amazing to see some of them, huge names in the culinary pantheon, undone by a brownie or a chocolate chip cookie.

It’s pretty bananas, what’s really kind of equally amazing is that I’m not the judge, I’m merely the presenter. The judging is done by five citizens of various walks of life that don’t know what is a professional or what is an amateur, they don’t know whose dish is whose. They are completely blind and the majority of the five wins. It’s really remarkable for me at least as someone who is a cook and not a chef, just the notion of seeing home cooks getting their skillsets validated and winning life changing money. They also get to realise that they can stand toe to toe with some of these incredible culinary talent. 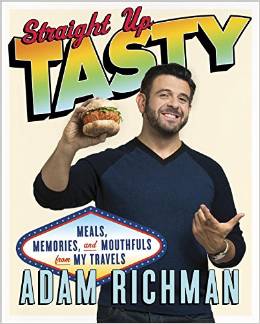 The cookbook which is coming out on 12th March 2015, is called Straight Up Tasty: Meals, Memories, and Mouthfuls from My Travels and it’s essentially I’m not a Japanese chef but I have received training in how to make sushi or that I’m not Italian but I’ve worked in an Italian restaurant.  So what I’ve done is a little bit of mix masters of recipes that I learned from friends, moms, growing up in Brooklyn or accommodation of flavours I’ve tried from various places. I didn’t want it to be a compendium of recipes; I tried to do some side bars such as places for the greatest burgers or the entire history of chocolate in rhyme. I did a little sort of synopsis and explanations of different cooking methodology because many people don’t know what it is to temper, braise or to poach etc. I had little recommendations to encourage other people to have culinary explorations of their own. I guess that’s what I’ve always been about.

You can pre-order Straight Up Tasty: Meals, Memories, and Mouthfuls from My Travels on Amazon UK here

You can pre-order Straight Up Tasty: Meals, Memories, and Mouthfuls from My Travels on Amazon USA here