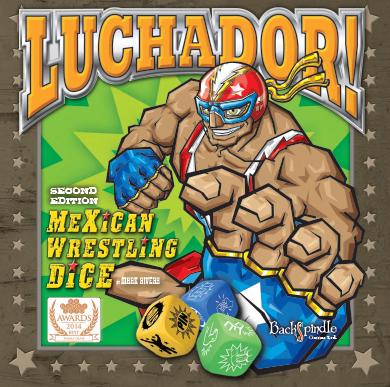 This one is a shout out to my home boys in Backspindle Games Ltd, the boys from Northern Ireland have done it again with this excellent board game. Their latest game is based on Lucha libre (Spanish pronunciation: [ˈlutʃa ˈlibɾe], meaning “free wrestling”). For those who are not in the loop this is Mexican wrestling. It’s brutal, fast paced and beloved by its home country. Oddly enough the board game holds its speed and even the brutality (without the violence) of the original sport.

The matches can range from two to four people, so either take on a friend or have a team match what ever suits your fancy. With a red corner and a blue corner going head to head there is so much that can happen. The game is all about the gamble, you roll dice to decide what damage you can cause, four per player. The rolls result in hits, blocks, counters, and miss. these are played off against each other then the ‘HIT’ dice can be rolled to see what damage they did. You can go for a good old fashioned hit or even grab a chair.

Sadly the standard game does not come with this epic ring

I know this sounds brutal but I should mention the game did win an industry award – the 2014 best family game, like I said it’s not really violent but it can be brutal.The game has even had a successful kickstarter, that’s how much of a fan base it has garnered and it’s easy to see how and why.

WINNING BY KNOCK-OUT (KO) – If a player’s Strength Score is reduced to zero (marked as KO on the Strength Score cards) or lower, their Luchador (wrestler) no longer has the strength to continue the bout and their opponent wins by a Knock-out.

WINNING BY PIN – If a player rolls a successful Pin result (using a Pin Die) and their opponent fails to break the Pin during the 3 Count Rule the pinning player is declared the winner.

If you’re a fan of the boardgame King Of Tokyo then you will appreciate this game. You can play with friends or family, it’s truly an all ages game. Whether you’re pounding drinks with your buds or getting your ass handed to you by your nephew, there’s nothing like yelling “CHAIR!” and “TABLE!” as you take your opponent down.

Backspindle have really made a winner of a game!

If you would like to get a copy of the boardgame please try here or here.

My other half just brought this home from @hmvbelfast_official today so if you are a fan of Halloween and a fan of Pokémon I suggest heading to @hmvinstagram and grab yourself one.
SIX SEASONS AND A MOVIE
I am very pleased with a lot of the new casting announcements for @netflixuk new Avatar The Last Airbender series.
My Tweets