Interview with Nick Moore about The Astonishing Adventures of Heracles Flint

It’s exciting times these days now that Belfast and Dublin will be having their first MCM Expo Comic Con. Local artists and writers will finally get a chance to display, sell and network closer to home. It’s been a long time coming and after attending many conventions we couldn’t be happier that we have a Comic Con in Belfast. Belfast has attracted alot of attention and interest thanks to MTV EMA 2011, Game of Thrones, Titanic Exhibition Center and many more.

As well as supporting the convention scene we also like to support local talent. Just before we went to London we came across this project on Kickstarter. As fans of Steampunk and Sci-Fi we were instantly hooked on the idea and wanted to help make this project a success.  We decided to have an interview with creator Nick Moore so that you guys can find out more about him and this project. You can pledge here.

What is the basic concept?

The novel, The Astonishing Adventures of Heracles Flint – Forever in Shadow tells of the adventures of monster hunter Heracles Flint and his global network of Victorian knights, The Society of Esoteric Technica, who have battled various threats to humanity in the late 19th century. 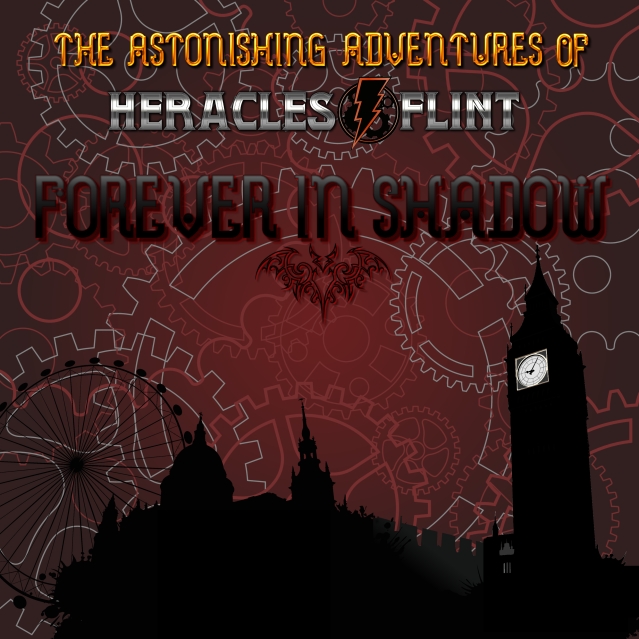 The Society led by Flint with his close companions, Diana Von Storm, the bride of Frankenstein’s monster, clockwork android Charles Brass, and Alexandria, Queen of the Wolves, fall foul of a plot to destroy them by their arch nemesis, the vampire God, Dracula.

Dracula has seized the time machine of Harold Wells, a descendant of HG Wells, who had been travelling back to Victorian London to visit his famous relative. Using Wells’ device the Prince of Darkness has constructed a portal to the present day, where he seeks to rule all, free of the constant pursuit by the Society who have thwarted his efforts for years.

In a pitched battle both he and Flint fall through time and Flint’s friends are lost presumed dead. In the present day Flint finds a much changed, much harsher, world than the future he’d hoped would evolve from his time, and gathering what resources he can, makes plans to stop Dracula once and for all.

If he fails, the world of tomorrow, will live forever in shadow… 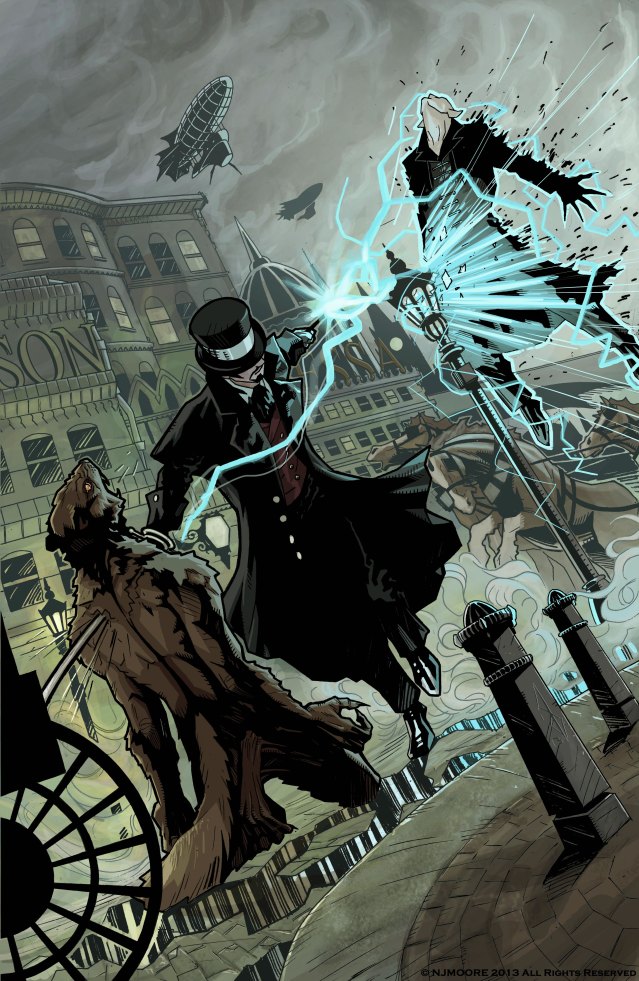 What comics did you read while you were growing up?

It’s more a question of what I didn’t read! I’ve got a 10,000+ collection at home that has amassed over the last 35 years, and I love each one dearly. It’s a broad range of everything, Batman, Superman, Green Lantern, X-Men, Captain America, Daredevil, Spiderman, Judge Dredd, Image stuff, Dark Horse, and the less well known stuff like Concrete, Strangers in Paradise, the list runs to dozens of titles.

How long have you been into the Steampunk scene?

I’ve always loved the Victorian era, it’s a time of huge advances in technology that today we take for granted, and there’s some great larger than life characters who made those leaps forward for humanity. As a kid I read H.G.Wells books, like The Time Machine, and the War of the Worlds, Conan Doyle’s Sherlock Holmes and others, and loved big real life characters like Houdini. I wondered if they knew more about the things they wrote about as it just seemed too fantastical, unless, maybe, Wells was a time traveller, and Doyle wasn’t imagining some of his supernatural tales, maybe it was all real. I would scribble my own tales based on that premise and they got filed away with all my other notes for books, movies, and comics.

I then found several years later that some writers had similar ideas and a brave new world of Victorian science fiction had been born. I was hooked and I dug out my old characters, and here we are.

What attracted you to Kickstarter?

Any creative project that you want to get out there, to hopefully have other likeminded people enjoy, will need money behind it to get it going. Crowd-funding lets you have that shot, if you’re successful of course. It would let me get the book edited to make sure I’ve not made the mistake of blowing up the same building twice, or have a dead character from a previous chapter dander past later in the book.

I’m planning comics set in Flint’s world but I wanted to get the book done as a foundation stone for that universe of sci-fi and horror. As a huge comics fan though, I couldn’t let the chance to have something comics related connected to the novel slip by. So I’ve teamed up with an awesome artist, Bentti Bisson, to create character and action shots that will go into the book. He’s done a great image of Heracles in action already and we’re on the same wavelength creatively, it’s so cool to find someone like that. Fingers crossed the Kickstarter takes off, it’s doing well so far but there’s still a way to go, because I really want to get that art done to get us on course to the comics to come.

What is your main inspiration?

Trying to stop my head exploding! I’ve 20 Batman movies sitting on a zip disc, remember them, at home along with 10 Superman films, novel ideas, comics concepts, and TV shows, this stuff constantly takes up space in my head. However I can’t get my hands on licensed characters, no matter how much I would like to stop Warner Brothers screwing up DC properties. I can try to start my own big bang and generate my own universe of adventure, and it’s something I’m committed to doing before I hit 40 next March. The clock is ticking.

What is your viewpoint on the comic scene in Ireland?

We need to shout about it more. A guy I knew in Talisman, which was Belfast’s No.1 comics store which became Forbidden Planet, wrote his own book, and at one time was writing ‘The Darkness’ at Image. For a long time I thought that was it, he was Ireland’s comics scene. Now with cool sites like Nerdgeist getting the word out, our own comics expo with D.I.C.E, and cool books like ‘Half Past Danger’ appearing as I scroll through the new books on Comixology, we’re definitely going places, and it’s great to see.

If you could work on any comic books or graphic novels, what would it be?

Apart from my own of course, I’d love to tackle Superman or Batman. Batman would be a dream gig but I’m perfectly happy to keep reading Snyder and Capullo’s current awesome run, one of the few good things happening at DC currently. Superman has been hurt by the New 52 changes, and is so bad that for the first time in 35 years there’s not one Super title on my pull list. Not sure I could fix the damage, but hell I couldn’t do much worse.