Backstrom- An offensive yet brilliant detective tackles difficult cases with backup from his eccentric team, while also trying to manage his self destructive behaviour.

Warning there are spoilers ahead.

With Hart Hanson developing and producing, and Rainn Wilson starring in the titular role, I was anticipating big things from Backstrom. Thankfully I wasn’t disappointed. However I’ll admit it wasn’t quite what I was expecting. Often pilots, especially crime dramas, are fast paced and filled with action. This results in lots of thrill and excitement but can make things feel a bit rushed. Backstrom, however, was more of a slow burner. They took their time with the story drawing it out, allowing us to really get in touch with the characters and plot. This was especially beneficial to Wilson’s character, who on first look is a bit of a douche, but as the episode progresses we see deeper into his psyche. Rainn Wilson, who let’s face it is good in everything, really excels as the grumpy detective. His comedic timing is perfect and he has great chemistry with every single character he interacts with. However his standout moments aren’t the witty scenes as you’d expect, but actually the more emotional ones. Anytime he is vulnerable he shines, in particular his shock at having to shoot someone. This, along with the admissions about his father and the rather frank conversations he has with his doctor enables the audience to really connect with his character. 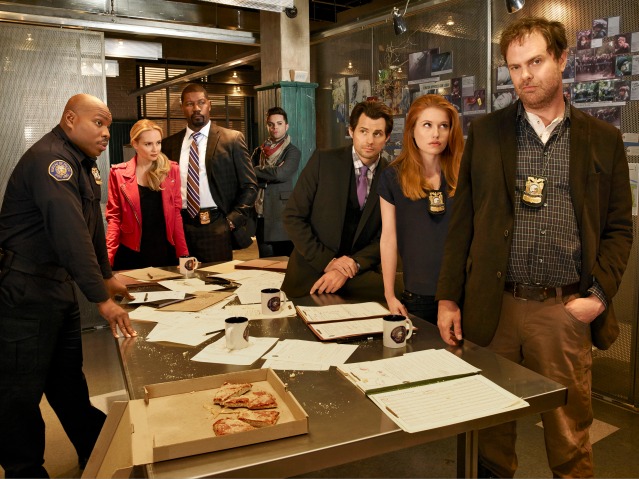 The supporting cast are made up of Genevieve Angelson (Detective Gravely), Page Kennedy (Officer Moto), Kristoffer Polaha (Sgt. Niedermayer), Dennis Haysbert (Detective Almond), Beatrice Rosen (Nadia) and Thomas Dekker (Valentine). Although we didn’t get to see much background on them, they all performed well, managing to establish themselves. What I really loved is that they all have their own little quirks, and come across as really likeable. Perhaps the best example of this is Kristoffer Polaha who does a great job in the pilot. Niedermayer is probably the nicest, most positive person on the team and as a result he is constantly berated by Backstrom. Yet he continues to engage with him, and looks upon him with admiration. Despite his intelligence, he has this innocent naivety about him which is refreshing amongst the quite cynical team. However the award for best performance has to go to Thomas Dekker who actually has the least screen time of any of the characters and yet seems to make the biggest impact. Dekker looks so at ease in the role and makes you fall instantly in love with his character. The scenes between him and Wilson are probably the best of the show. Although since he was so underused in the pilot there is an air of mystery about him. There was a subtle hint that he may be related to Backstrom but I predict that there’s going to be so much more to Valentine than we think. I’m hoping that we get to see more of him in upcoming episodes.

With a great cast and intelligent writing Backstrom is off to a strong start. But with so many crime shows on television these days, it will have to fight to stand out from the crowd. If it lets the quality dip it could be facing cancellation. However the pilot showed that the series has lots of strengths, most impressively a plethora of great supporting characters. If the show can capitalise on this I’m sure it will be a success.