I have been following this series for a while now and every issue is better than the last. Vampirella Vs Purgatori see’s our heroine Vampirella team up with the demon Purgatori in a race against time. As they two women must locate and find as many humans with good and pure souls as possible, before the Mother of Monsters herself, Lilith, manages to corrupt one of them and trigger the apocalypse.

When we last left our heroes, they were deciding to go on the offensive and take the fight to the villains. 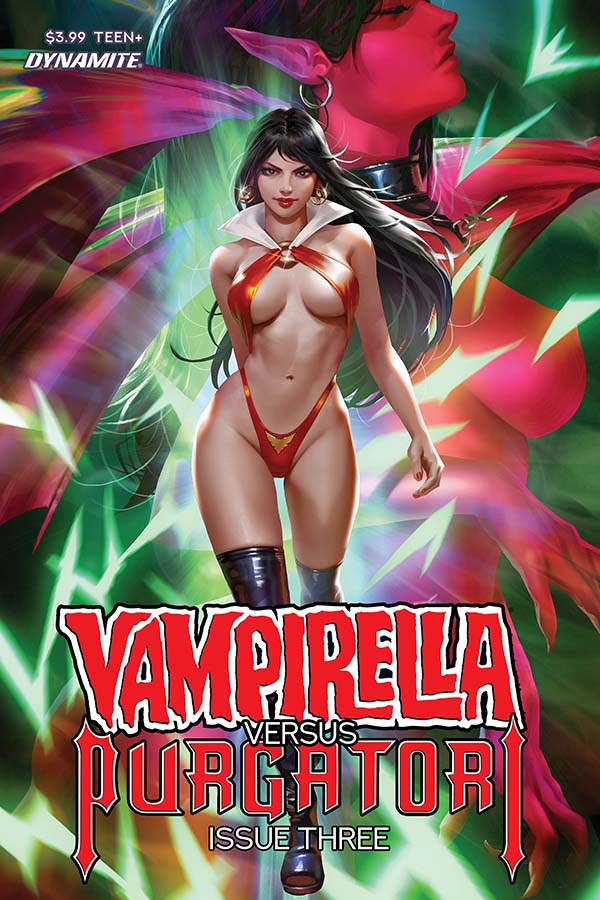 A lot of great action in this issue, at times it really is balls to wall. Though at other times it is much more sombre. And when I say sombre, I mean it, in this issue the themes get a hell of a lot darker. Which is to be expected especially since it sees Lilith attempting to corrupt a pure soul. But it is balanced out wonderfully with a few very funny scenes. Take all this together and you have the ingredients to make a really great issue of a series that has just gotten better with each new chapter.

Plot wise we do even get a few curve balls that I do not feel comfortable sharing with you guys just yet.

Ray Fawkes has done an amazing job taking a plot that could be seen as very generic and adding his own dark twist to it. With every page sucking us in, just begging for more.

Lilith and Vampirella have each collected a handful of Tzadakim, but all it takes is for Lilith to corrupt one to end the world.

And i know I have said this before but Álvaro Sarraseca is an extremely talented artist and his work on this series is second to none. He manages to show gore without it being too gratuitous, he manages to show half naked women and it never comes off as sexualised but more a celebration of the human form (or is that demon form) and he helps make this world ever so stimulating.

Another fantastic book and another reason that people should read comic-books.  I really cannot wait for issue four to come out.

Best investment this year
As always @audible_uk / @audible are helping me survive night shift and with Wheel of Time about to be released it just seems fit to revisit the series.
After I retreated indoors to get away from the heat I thought this would be a good idea...
My Tweets