If you are looking for an in-depth look at genius then this is the film for you. Frankly my knowledge of Frank Zappa purely extended to the fact that my long-forgotten stoner friend absolutely loved him, and would spend hours lecturing me on why Zappa was a God. I will gladly admit that even back then not knowing much about the man, being ignorant of so much and truthfully just being stupid kid, back then I knew this music was truly something special.

To create this movie director Alex Winter, yes Bill and Ted’s Alex Winter, delved deep into Zappa’s mind and through use of interviews, news stories and Zappa’s own massive collection of self-produced videos created something special. A documentary that was 6 years in the making and every minute of every hour was well used. From start to finish I could not stop watching it. At one point near the beginning, we hear Zappa talk about how he just loved editing his own videos, I think he would be very pleased with the outcome of this movie.

This is a tale that includes Alice Cooper, David Bowie, The Beetles and even Charles Manson. Much like Zappa’s music his life is something that you won’t hear or see anything quite similar.

Winters shows us Zappa through Zappa’s eyes, we hear about how ideas like race and gender never bothered him and how that scared people. For him it was if you could play music then you were worth something to him. He would take musicians and bring out the best in them, only to discard them when he was done. Not out of malice but because it was just how he worked. 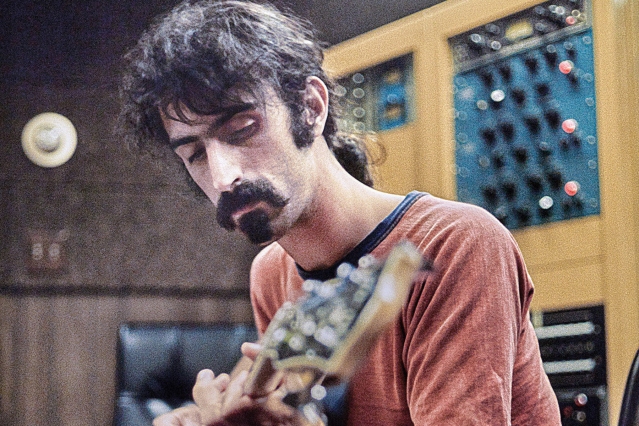 We learn how before Zappa became the legend that he is now, he worked for a greeting card company, scored several movies and even ran a small recording studio – which ended up getting him arrested.

Zappa as a man was someone who was both a perfectionist and almost zen like shaman. I would like to say he was ahead of his time, but then without him the world would not be as accepting of the freaks and the weirdos. We also learn that unlike many of the other performers, who idolized him, Zappa actually was involved in the business side of his music, which in the 1970’s was nearly unheard of.

I cannot stress this enough but Zappa definitely had his own gravity and you see that with the members of his band. He created music for worlds that only he could see and he sought out unusual sounds and made the masses sit up and think. At any point he could have been conventional, but then he would not have been true to himself. Zappa lived a life that was freer than most and I think many of us wish we could be a little more like him and maybe that is why there is so much bitterness and rage in this world.

This one really is worth a watch.

If you watch this and want to see another great documentary by Alex Winter then I suggest checking out Deep Wed.