The Total War series is an undisputed classic. It has been going for nearly 21 years now, so lets face it they must be doing something right. The games are that combine turn-based strategy and resource management with real-time tactical control of battles. Rather uniquely for real-time strategy games, flanking maneuvers and formations factor heavily into game play. This helps give you that extra level of realism that make these games so good.

And even though these games have realistic combat there is nothing quite like taking all that realism and throwing in some Elves, Dwarven Helicopters, Demons and Vampires?

Now you have the Total War: Warhammer series and this is where the fun really begins.

Warhammer, AKA Warhammer Fantasy is a board game produced by games workshop. It is a classic tabletop game where players make fantasy armies battle to the death. It is really fun and highly addictive. If like me you do not have much time for to collect and paint an army then Total War: WARHAMMER may be the perfect game for you.

The new trailer depicts two most northern factions battle it out. On one side is the Armies of Kislev they are one of the last bastions of civilization and they are lead by Tzarina Katarin Bokha, the Ice Queen of Kislev. A nation that is constantly on the brink of destruction they represent the best of humanity. But against them is a horde of Deamon aligned Barbarians (Yes I did mean Deamon). These bestial raiders want nothing good from this world and only care for destruction. 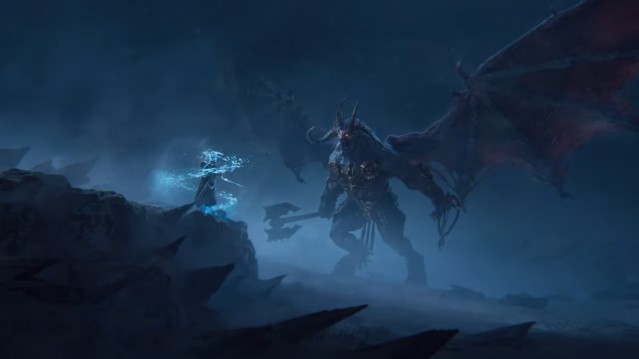 My absolute highlight of this trailer was when we got to see  Tzarina Katarin Bokha challenge a mighty Bloodthirster to single combat. I think I may be in love…