Point and click adventure games such as the now legendary Myst once stood tall beside first person shooter, survival horror, fighting, side scrollers and strategy games, but somewhere along the way this genre fell to the way side and became forgotten. In recent years the genre has seen resurgence in popularity, mostly thanks to indie developers. One such indie developer is Northern Ireland based company BillyGoat Entertainment.

They have just launched their Kickstarter to help complete HM SPIFFING, their new ever so British and delightfully witty, blast from the past styled adventure game.

From what I can see the game has a great sense of humour about itself, it’s going to be the type of game to lure you and get you relaxed, granted this will be mixed with some puzzle’s, so don’t get too comfortable. The game plays seems pretty fluid and this is only going to improve over time, not that there is much to improve. In the game you play as Captain Frank Lee English, a true Brit, on his quest to expand the British Empire, through less traditional means, since the old school ways have ‘fallen out of favour’. 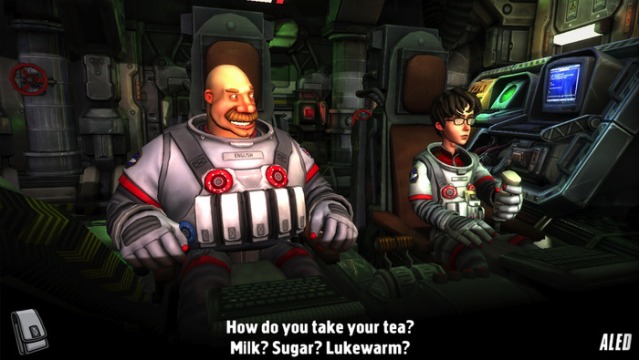 You have your ever so British space ship which will guide you on your nobel quest for the Queen and the country. Described as a near futuristic ship the HMSS Imperialise will be your starting off point. You won’t be alone on this quest, you will have your second in command and indifferent Welsh man Aled Jones. It’s always nice to see the Welsh represented, very rarely are they seen in video games. To help get you hooked, Billy Goat have promised us several mini games; they really have sweetened the pot with this offering.

The environment is both colourful and engaging, which is certainly important for a game based on point and click. You need to be drawn in to the point where you won’t be looking out your windows and the only world that matters is that which sits in front of you.  This game does that, every image I see is filled with so much detail you could easily just lose yourself staring at them.

It’s not just the environment that is so engrossing but the whole world itself. It’s filled with plenty of games and pop culture references. With a Monty Python styled humour and their first chapter referencing Star Wars I’m sold and completely sucked in.

If you’re looking for something unique and fun this is the game for you. To try this game click here for the demo. To find out more information and to make a pledge, visit their Kickstarter here.