From the beginning of its opening number I knew that this particular rendition of Macbeth was going to be extremely unique and haunting. I won’t lie, going  to see a musical take on one of the few Shakespeare plays that I like, they are few and far between, was not on my to do list, but I am glad that I was there to witness this dark spectacle.

One thing I should note about this production is that it is rage inducing. Now you’re probably wondering what made me so angry, well it was envy. This was a youth production, but the talent was unbelievable the YMT (Youth Music Theatre) have gathered an impressive group. To further my envy they had but 2 weeks to prepare for their performance, TWO WEEKS, I can barely memorise material in that time never mind some very complicated routines. The infamous dagger scene was organised chaos with a dozen cast members moving about in the dark on stage; magnificent is the only word that I can use to do it justice. Later I was informed that this lead too many bruises among the young cast in rehearsal but everyone wanted to get it right so it was a classic case of the show must go on.

Now for the music. This production was two years in the making and the music was the best place to see that. It was powerful, deep and haunting, having more in common with an opera than a standard musical.  I have always found Macbeth to be a very emotional tale and the music just drewyou further into this tale of murder and deceit. The standard dialogue was either slightly reworked or kept exactly the same, so know diehard fans will be insulted, the music was just used to lend gravitas to the words. 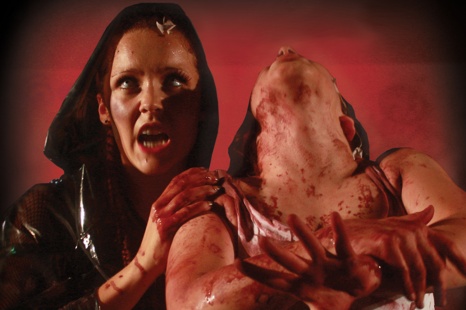 For the cast it’s hard to find anyone that stood out more than Lady Macbeth (Molly Coffey) stole the show every time she sang. That’s not to say that there were any other poor performances, because there were none. The moment you stepped into the theatre your met by the cast, standing behind fences gazing at you like you have walked into some post-apocalyptic nightmare, they barely move. It’s terrifying and eerie, for when they aren’t performing, before, during the interval and until everyone leaves, the cast stay still watching over the audience, it was a nice touch. The cast’s dedication would rival any professional and should be commended.

Several of the cast members even played instruments during the performance, it seems like it may not work, but it did, helped bring the music and words closer and closer together, plus further highlighting the talent that the YMT draws from.

For the costumes, there was a wide variety if choice, from suits, to rags, to everything in-between, the chaos in the outfits reminded me the chaos that was about to unfold in set, it’s a small touch but one I welcomed.

For any theatre goers out there, I implore you don’t role your eyes at the work the YMT do its wonderful and inspiring, they will be doing performances in Belfast, Plymouth, London and so many more places, click the link here for more information.

If you like what you have read you can check and want to see if you can join then please click this link because they will be holding the 2015 auditions very soon. The YMT is quite the sleeping giant they even managed to take an original play to the West End, this is quite the feet as it’s a very saturated marked but they managed to break into it.

For more performances in the Lyric theatre please click here.

Two great releases from @dynamitecomics starring two of the most badass women in comics. Vampirella and Red Sonja, if you want two books filled with a few epic moments, fantastic art and world ending stakes then these are the books for you.
Not the flashiest pictures but I was just glad to get back to the cinema last night. @moviehousecinemas did a fantastic job with social distancing and the atmosphere was very relaxing.
I've been looking for something different to watch and came across Uncanny Counter on Netflix
My Tweets