While at MCM Belfast Comic Con we had to chance to interview Comic Writer Jeremy Biggs.

Can you tell our readers a bit about yourself?

My name is Jeremy Biggs, I’m the Writer and Publisher from Subversive Comics.

Can you tell our readers what your Comics are about?

I do two Comics, One is Bearlands and the other is Metal Made Flesh.  Bearlands is about Zombie Bears, it’s basically like The Walking Dead mixed with The Care Bears. Metal Made Flesh is a mature Sci-Fi fiction story concerning three Assassins on a planet where they have to survive a hostile environment. 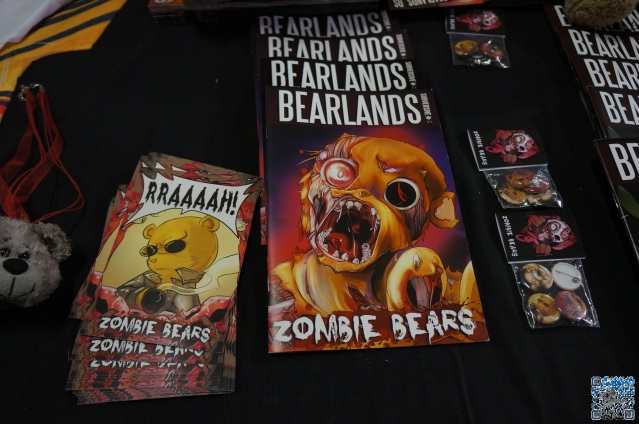 What was the inspiration for creating Bearlands?

I was working on a film called The Dead (2010), which is basically about Zombies. ( An American mercenary, the sole survivor of a plane crash, has to run the gauntlet across Africa, battling with the living dead.)

Where do you plan to go with the series?

We’ve got five issues out at the moment. The sixth issue will tie up the whole of the first part of the story, we will introduce new characters and reveal the Big Bad right at the very end. He’s the motivating force of the whole story. The whole Bearlands series is probably going to be about forty issues in total, which I may collect into individual books at some point in the future. There will be a Kickstarter for issue six. After Issue six there will be a slight break as I’m off to China for six months. When I come back we will pick up the story again. We also have an animation in the works with an Animator in the USA, which will be out later on.

Where can our readers purchase your comics and Zombie Bear plushies?